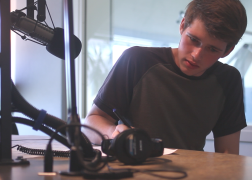 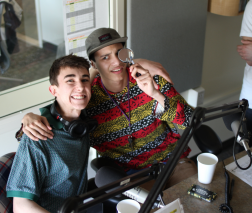 Nancy Bidwell was 17 at the time of the Great Alaska Earthquake. She was on Fourth Avenue in Anchorage when the destruction began. Story by Alaska Teen Media reporter Chloe Chaobal.

My Earthquake Story: Jim Curran
ATMI’s Rob Stanley with an interview with Jim Curran as he retells what he was doing when the 1964 earthquake rattled Anchorage.

My Earthquake Story: Mary Federoff
ATMI’s Michael Stormo with a story about Mary Fedoroff as she recounts the Good Friday Earthquake of 1964.

Working in Prudhoe Bay
ATMI Reporter Sam Bernitz spent the day in Prudoe Bay and wanted to know what it was like working in the extremely isolated area. He got a lot of strange looks because young people don’t usually show up.

Proposition 4
ATMI Reporter Barae Hirsch with a thorough look at Ballot Measure 4. The measure would enable the Alaska Legislature to ban proposed mining in the Bristol Bay watershed if lawmakers believe the project would endanger wild salmon stocks. Barae is also a member of Alaska Youth Vote.

Youth on Councils
ATMI Reporter Chloe Chaobal looked a what roles teenagers play on community councils? Do they even have a role and are they taken serious? These questions were brought up at a recent Anchorage Assembly meeting.

Chicago Commentary
ATMI Producer Arina Filippenko attended the Third Coast International Audio Festival in Chicago, where she learned more about creating radio and met dozens of radio producers from around the world. She takes us through her trip.

Obsession Records
As people hit the streets for Black Friday shopping, a new store in Anchorage made its debut.