I’m a high school student in Alaska. We spend more time practicing for a mass shooting than for an earthquake.

They call us the “Mass shooting generation.” That’s the headline that sticks with me the most. Not the counts of the dead, not the headlines declaring Nikolas Cruz to be mentally unstable, not even the ones that list how many mass shootings have occurred. It’s that my generation, the kids that are choosing what to do with our lives, preparing for prom, getting our driver’s licenses, applying for our first job, are now growing up in a world where we’ve been labeled “Most likely to die in school.” Read More…

Music where you’d least expect it

In the tunnel near Elderberry Park in Anchorage, 23-year-old Oliver West tunes his guitar. It’s 9 p.m. The pluck of an E string rebounds off the wall. The echo creates a stir on the Coastal Trail and a cluster of people gather to watch. Read more… 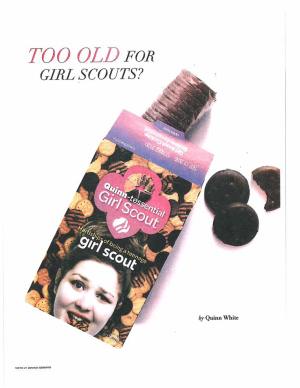 Too old for Girl Scouts?!

It’s lunchtime at West Anchorage High School. My friend and I walk over to Carrs Aurora Village to get some snacks. He finds some knockoff Samoas for $2.49. Yes, I remember the price. What was worse, they appeared and tasted the exact same as the real deal. Put the fake ones in a Samoa box and I don’t know if I could tell the difference.
Read more…