In Other News Live on Stage at the Wilda Marston Theatre 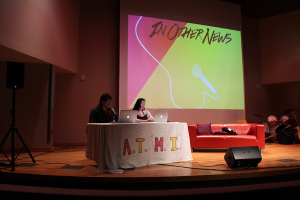 ATMI Reporter Kendall Stormo spent the afternoon at Denali Dreams Soap Company to learn about what goes on in their Spenard Shop.

For 30 years, Dino’s Donuts bakers have been spending late nights perfecting their craft. And for 30 years, people have woke up at 4am for fresh donuts. ATMI’s Francisco Martinez, Chloe Chaobal and Sam Bernitz took a trip to the shop.

ATMI movie critics Anna and Michael Stallworth interviewed the guys of InJEKT Films and discussed how the group came together, what keeps them going and their plans for the future.

ATMI Reporter Arina Filippenko traveled around town riding the People Mover and asked individuals on the bus what it’s like to live in Anchorage, and any advice they have for kids growing up here.

The second edition of In Other News Live on Stage was themed “Growing Up in Anchorage” and featured stories, music, an interview and more!